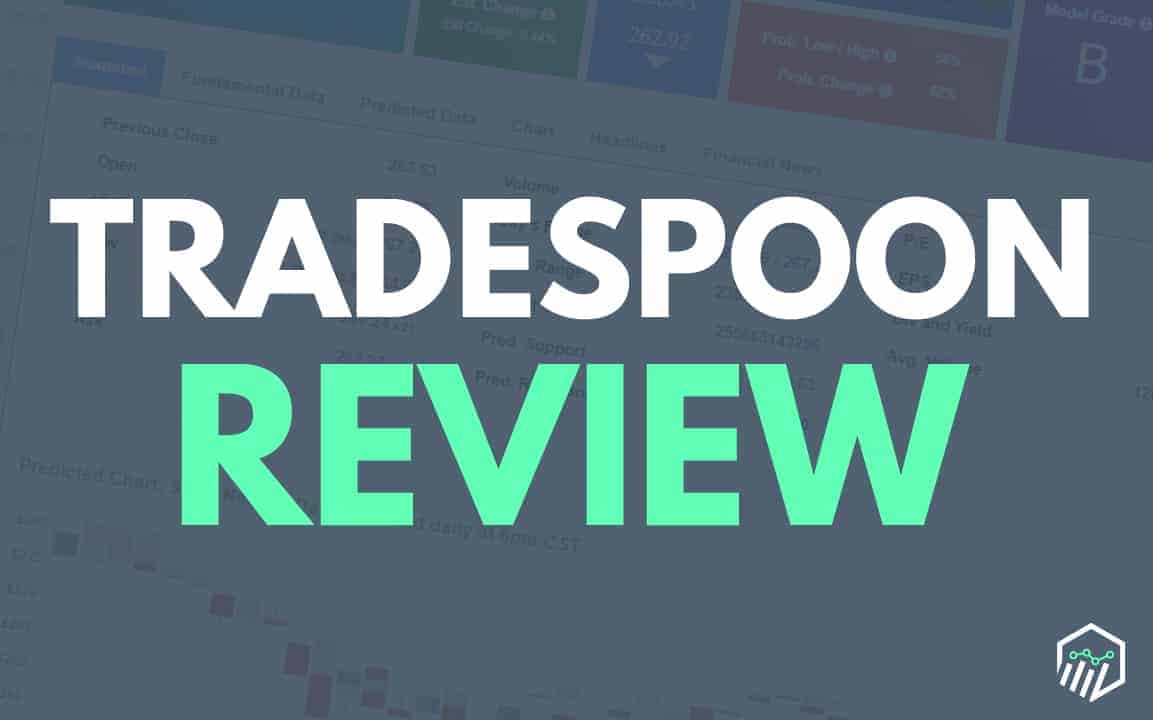 TradeSpoon aims to predict the movement of stock prices with predictive analytics. The platform claims to make accurate predictions that help traders find the most profitable opportunities. The question is – do they deliver?

TradeSpoon is a piece of software, that among other things, aims to predict the movement of stock prices using predictive analytics. The company is not that clear on what they’re trying to market themselves as, they offer tons of useful tools, but they don’t seem to have a cohesive idea to brand all of them under. The front page of the website is quite vague as to what they offer traders, which is likely a key reason why they’re still a bit under the radar in the fintech space. Discover more in our TradeSpoon review. 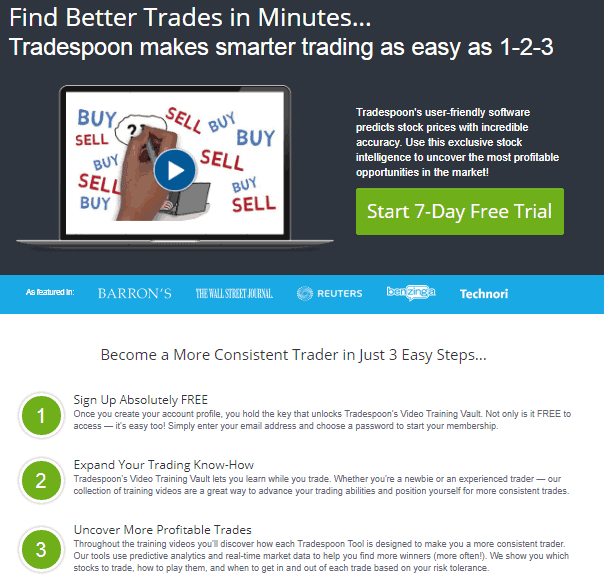 All of these tools, in some way, aim to tell you where a stock will be trading in the future, which as any trader knows is a feat that countless geniuses throughout history have tried and failed to do, so it is worth taking TradeSpoon’s claims with a grain of salt.

TradeSpoon has four different membership options, with one of them being free.

You don’t get much for free at TradeSpoon, other than some of their training videos/webinars, mostly serving as marketing materials to get you to sign up for a paying membership.

According to TradeSpoon, you get

This is the cheapest of TradeSpoon’s paid tiers. It costs either $127/month, or $697/year, depending on if you pay annually or monthly.

You get access to their main tool, the Stock Forecast Toolbox, which uses predictive analytics to predict the price trend, high/low, and specific price action (by predicting candlesticks). You can choose an intraday prediction (1 hour), short term (10 day), or long term (6 months). Learn more from the TradeSpoon review below. 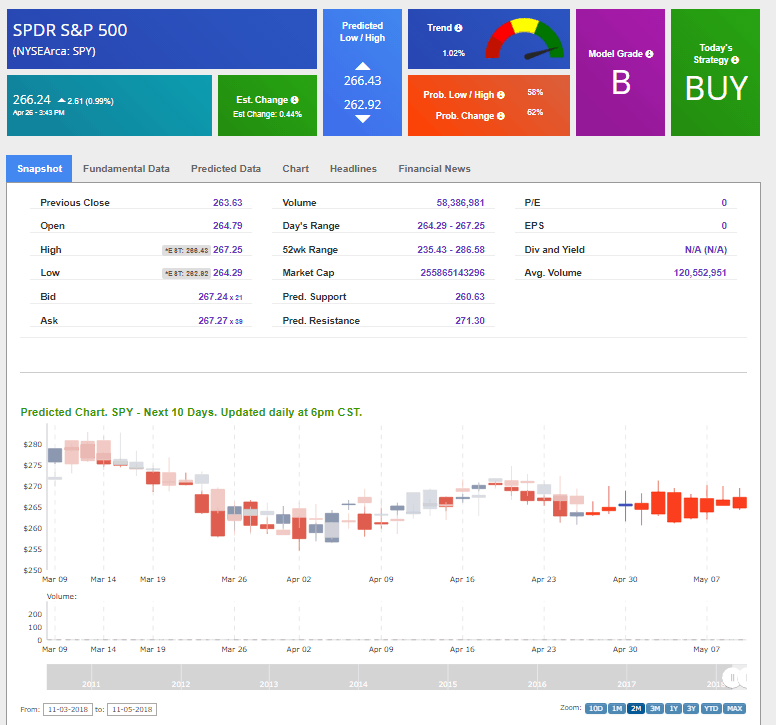 This is the second most expensive paid tier. It includes the Stock Forecast Toolbox, plus other tools.

In addition to the Stock Forecast Toolbox, it includes:

Here is what TradeSpoon has to say about the membership:

“This membership includes the Stock Forecast Toolbox along with full access to all of Tradespoon’s Institutional – Grade Tools to combine Tradespoon’s excellence in identifying outcomes of trade performance with your own personalized investment preferences.”

This is the most expensive of the paid tiers as found in our TradeSpoon review.

It includes everything from the TradeSpoon Tools plan, plus other tools, research, and education, including:

Here is what TradeSpoon has to say about the plan:

“This ‘Ultimate’ Tradespoon membership includes everything we have to offer. You’ll get access to both the Stock Forecast Toolbox and Tools Memberships, but there’s more! You will receive our Premium Member Stock & Options Picks with exact entry/exit points, Email/SMS alerts with pick updates, Evening Videos detailing our pick generation process, and more…”

The Stock Forecast Toolbox is TradeSpoon’s main feature, it is the tool that the entire platform is built around. Using predictive analytics, it aims to tell you exactly how to trade a specific stock, including the trend direction, trend strength, daily strategy, predicted high/low, and predicted price action for the next 10 trading days. In a sense, this is similar to what VectorVest offers.

The Estimated Change box prints what TradeSpoon’s predictive model predicts the returns for that day’s session to be. As you can see above, the model predicted a return of 0.44% in SPY on April 26, 2018. The actual return turned out to be 1.02%.

This displays what the predictive models predicts the trend, and the strength of the trend to be. The five tiers are Very Bullish, Bullish, Neutral, Bearish, and Very Bearish.

TradeSpoon has this to say about the feature:

“The Trend calculates the change of the Forecasted Average Price relative to actual prices from the previous period. The column shows expected average price movement “Up or Down,” in percent. Trend traders should trade along predicted direction of the Vector. The higher the value of the Vector, the higher its momentum.”

This box displays the probability that the predictive models give to their predictions actually happening.

Here’s what TradeSpoon has to say about the features:

This box displays the level of accuracy the model has had in predicting prices correctly.

Here’s what TradeSpoon has to say about the feature:

This box displays what the ultimate verdict of the predictive model is, should you buy or short the stock?

Here’s what TradeSpoon has to say about the feature:

“Buy, hold, or sell decision is based on mathematically predicted turning points. Stock has a tendency to revert to its mean. Model suggest to trade when stock reaches predicted LOW and HIGH values for current and next trading sessions. Please do not assume absolute levels of High and Low will be reached by stock outside of first two trading sessions. Model also predicts turning points. If stock closes outside of predicted price range defined by LOW and HIGH of current and previous two trading sessions, it could be indication of the change in the direction of vector.”

One of the most compelling features of the Stock Forecast Toolbox is the Predicted Chart. The algorithm actually predicts the specific price action for the upcoming 10 trading days. While not completely accurate, it seems that the algorithm is at least directionally accurate pretty often. Who knows how effective it would be utilized within a trading system, though. It is difficult to backtest a feature like this, and TradeSpoon has no backtests of any of these features on their website.

While a very interesting feature, it fails to justify itself. There are no studies of its accuracy over  large number of trades, or any trades at all. I fail to see how a seasoned trader is going to utilize or test the effectiveness of this. Perhaps with the inclusion of an API, or at least some backtests included with each Stock Forecast, more people would flock to it.

I have mixed thoughts on TradeSpoon, as discovered in the TradeSpoon review,  while they have a founder with a decorated track record in Vlad Karpel, who used to be the Head of Technology at OptionsXpress, that doesn’t excuse the lack of evidence behind the platform’s effectiveness.

This is a trend in trading-based fintech that I, personally, am getting quite tired of. Every week there are new platforms hitting the market using all the correct 2018 buzzwords, artificial intelligence, deep learning, quant, etc. Not that these things aren’t real, they totally are, but people expect to sell products based on throwing a few terms around. Are we, as consumers, supposed to assume the platform’s value is self-evident based on these buzzwords? Is a whitepaper with some actual science, maybe some backtests, and a layman’s explanation of what is driving these predictions, too much?

My question is, where are the traders using this? Any decent trader knows not to buy in to systems, software, or setups without verifying their validity. They don’t get to where they are without doing so. So what is an experienced trader to do? Buy the platform and paper trade it for a few months, while paying the platform fees, before they trade it? Because that’s the only option the platform gives a trader. It is worth noting, however, that TradeSpoon offers refunds if you’re not satisfied within 30 days of your membership.

Sure, they have a few “performance” reports on their website, which is the performance of a portfolio of the trades that they choose and send out to premium members. The portfolios start less than 2 years to today’s date.

There’s also the fact, that if this technology was so good at predicting asset prices, the developers could trade their own capital for a few years, then raise capital to start a fund with it. It would be vitally important to keep the tech proprietary, so selling it to the public wouldn’t make much sense. There’s very likely much more money in scaling up a quant fund, then selling this software to traders.

All in all,  I’m sure the platform’s tools can be harnessed to profit in some way, it’s just hard to believe that if the technology is as compelling as it’s made to sound, that they wouldn’t back it up, or at least provide traders a way to test it themselves. Because of their massive claims of being able to predict stock prices, I am skeptical.

Despite all of this, TradeSpoon has a healthy quantity of testimonials from their customers who are seeing massive profits.

Darqube Review – Is This Online Trading Terminal Right For You?

JStock Review – A Look At This Watchlist And Portfolio Management Tool

Stock Rover Review – An In-Depth Look at the Platform