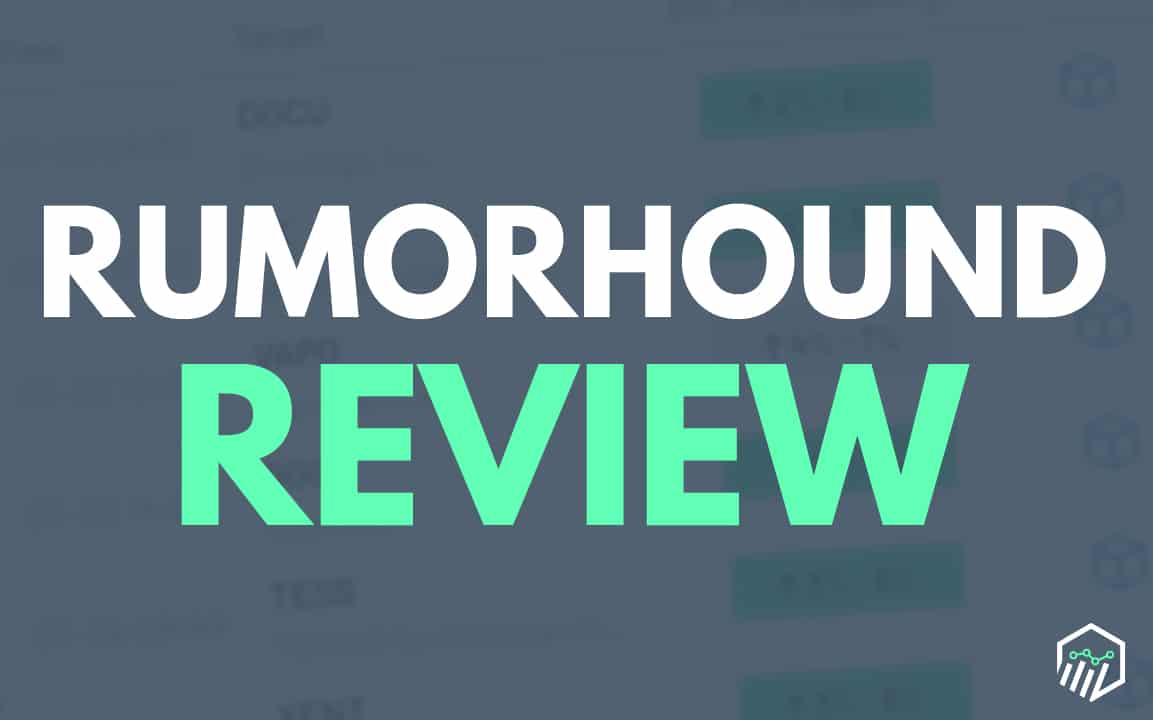 Are you interested in trying out RumorHound? RumorHound is an artificial intelligence-based platform app that includes some unique tools and features. With an AI-algorithm, interesting filters, and more could RumorHound be right for you? Read our review of RumorHound and learn more before you buy.

RumorHound is an intriguing artificial intelligence-based app that promises to alert you to mergers and acquisitions before they actually happen. The platform scans social media, stock news services, and other publicly available data to surface rumors that hint at a looming deal. For traders, that offers the opportunity to invest before the deal makes headlines and the price jumps.

RumorHound offers three pricing tiers. A Standard plan costs $19 per month or $182.40 per year and includes most of the features you need, such as SMS alerts and source filtering. But, you don’t get a feed of the most reliable sources, automated estimates of a source’s reliability, or estimates of how big a price move a rumored merger is likely to cause.

RumorHound offers a free trial of the Pro plan for 14 days.

RumorHound is a unique platform that uses artificial intelligence to identify rumors about mergers, acquisitions, and sales. You’ll need to take the rumors with a grain of salt, since the platform’s most common source appears to be Twitter. But, the platform does a nice job of presenting the information you need to make your own decisions about whether a rumor is likely to be true.

To start, with every rumor that the service picks up, there are links out to all the sources it found that put the merger or acquisition on its radar in the first place. So, you can (and should) take a closer look at what RumorHound’s AI was reading and evaluate it for yourself.

If anything, RumorHound is too noisy rather than not sensitive enough. The list of recent rumors vaguely resembled the list of biggest price movers for the day, which isn’t surprising since those are mentioned a lot on social media and in stock news sources.

You can also filter prospects by the number of sources that RumorHound picked up. This cuts both ways, though. On the one hand, these rumors are more likely to be true since they’re appearing multiple times. On the other hand, the more the rumors get out, the more likely it is that you’re already behind the ball on getting in before a big price movement.

The estimated price impact feature was a little bit disappointing. RumorHound doesn’t seem to distinguish between price movements due to M&A rumors versus price movements for other reasons. So, on days when the entire market or sector is moving in response to some news, the estimated price impact’s usefulness completely goes out the window. On one news-filled day, almost all of the companies with reasonably reliable rumor sources had already surpassed their price targets, even though none of them had made M&A headlines yet. 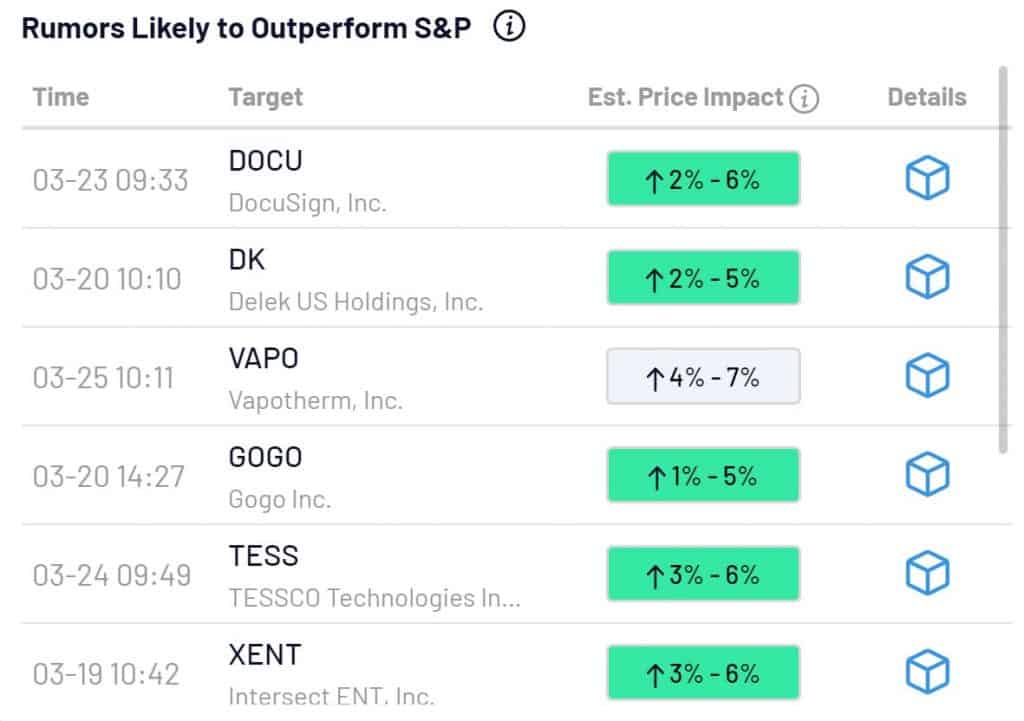 The other thing to watch out for is the “most active superstars” list, which highlights the rumor sources that are most reliable and frequently pinged by the RumorHound algorithm. A large number of these “superstars” are market news sources like Bloomberg.com, StreetInsider.com, and TheFly.com – or the Twitter accounts of these sites. 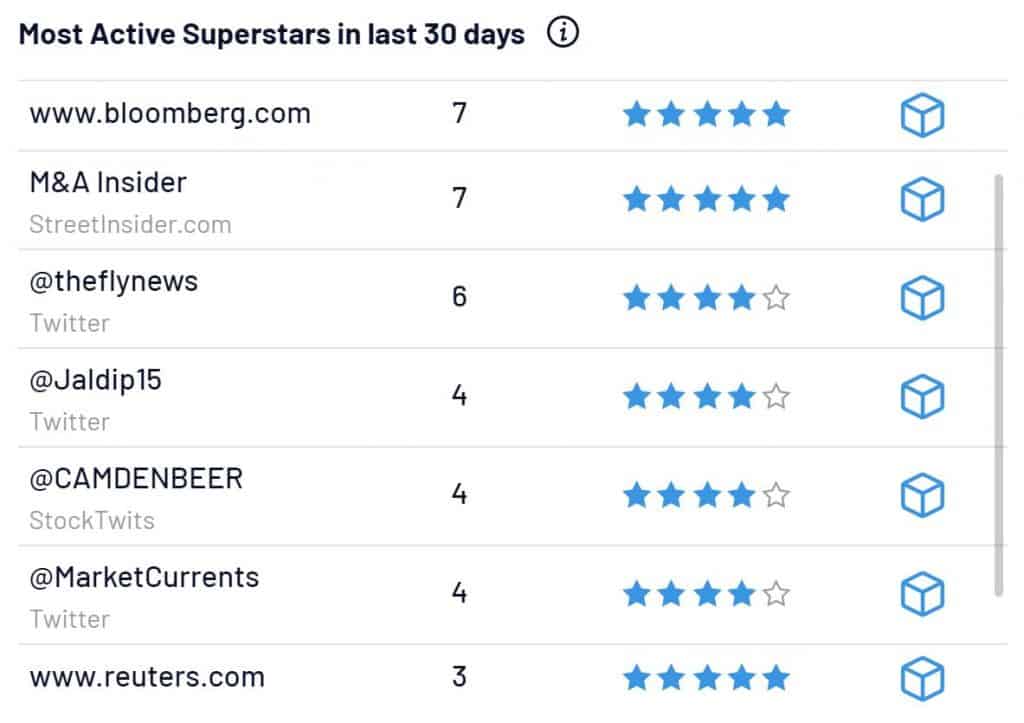 Those dings aside, there were plenty of good leads in the RumorHound display. It picked up a number of unfinished deals for which a price hadn’t yet been declared, as well as unsubstantiated rumors that could easily turn out to be true. The platform has recorded 92 deals that it’s picked up ahead of time since launching, many with lead times of 200 days or more. 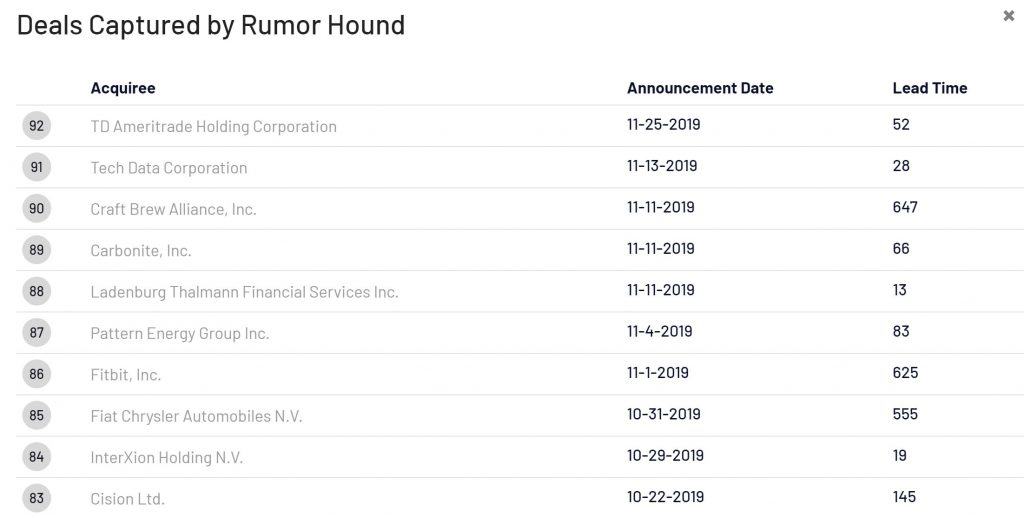 The main customization feature that RumorHound offers is a set of filters. You can restrict your rumor search based on market cap, average daily volume, market sector, or company location by country. You also set up SMS and email alerts that will trigger whenever a new company appears on your filtered list. But, since there aren’t that many filter parameters to choose from, this can result in a lot of alerts if you’re not very restrictive.

RumorHound offers iOS and Android apps in addition to a web-based desktop interface. So, it’s easy to check for new M&A rumors on the go.

RumorHound isn’t the only platform looking for mergers and acquisitions – pretty much every stock news service is looking to break headlines, too. But, RumorHound is the only trader-focused service that uses artificial intelligence to spot mergers before they’re official, or even officially rumored. The platform is easy to use, although it can be a little bit noisy and you’ll want to be careful to vet the sources before acting on any rumor that’s identified by AI.

What Type of Trader is RumorHound Best For?

RumorHound is best for traders who are actively hunting for mergers and acquisitions. It takes a lot of time to sort through all of the rumors that the platform surfaces, and even more to analyze whether a merger that’s legitimately rumored is actually likely to go through. So, while everyday traders might be able to get some insight from the app, it’s mostly suitable for traders who know how to build positions around M&A announcements.

Born to Sell Review – Is This a Good Tool for Options Taders?