Benzinga Pro vs. TradeTheNews – Which News Scanner Is Better? 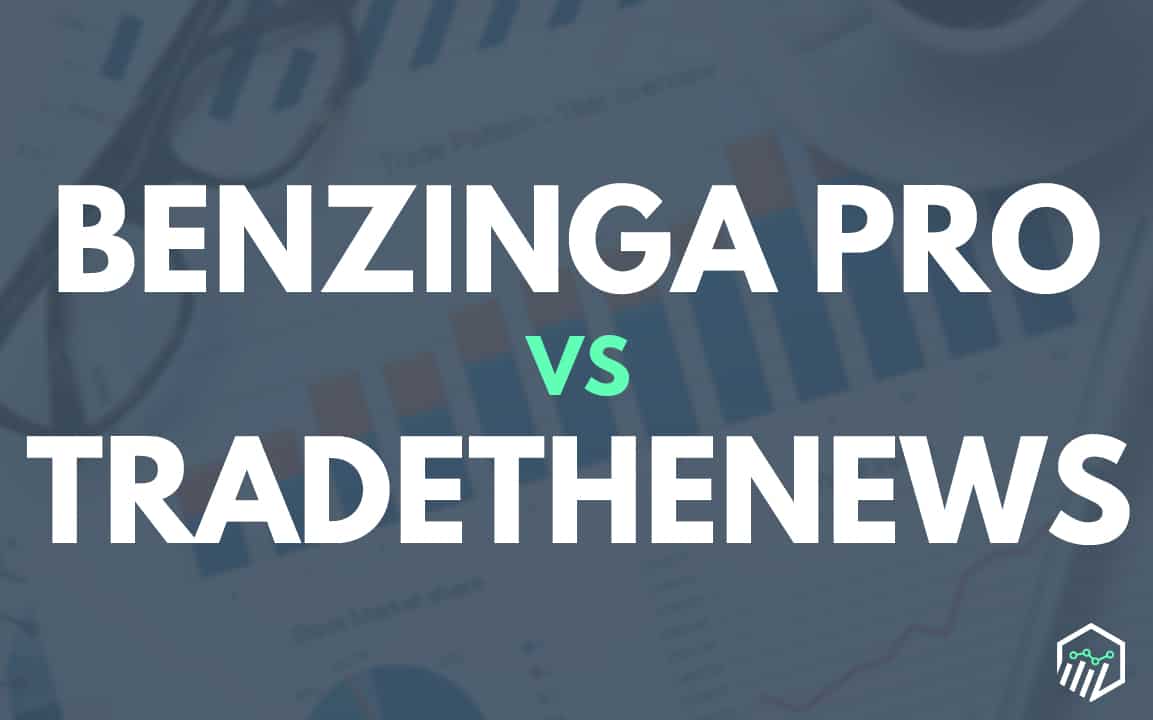 If you’re interested in gaining an edge on the market with a real-time news screener, it’s worth taking a close look at Benzinga Pro and TradeTheNews. Both of these news services are designed specifically for traders and offer numerous features to deliver actionable news as quickly as possible.

In this article, we’ll compare Benzinga Pro vs. TradeTheNews to help you decide which is the better news service for you.

About Benzinga Pro and TradeTheNews

Benzinga was launched as a financial media platform in 2010 and now receives over 16 million monthly visitors. Benzinga Pro, which was designed as a paid service specifically for traders, was launched a few years later. While the news stories on the two platforms are similar, Benzinga Pro releases headlines in real-time, while Benzinga has a delay of several minutes or longer. 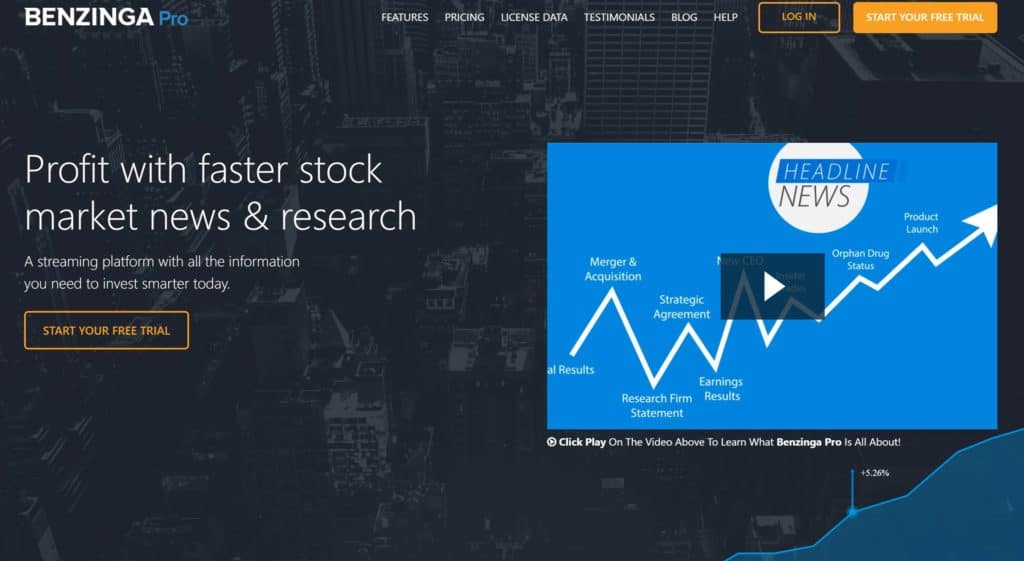 TradeTheNews is an older news service founded in 1997. The service was the first to company to introduce an audio squawk feature, which is now relatively standard among real-time market news services.

Both Benzinga Pro and TradeTheNews are built to get headlines to traders as quickly as possible. That said, TradeTheNews has a reputation for being slightly faster than Benzinga Pro. We found that the difference is typically only a few seconds, but that can make a significant different in your profitability when trading around breaking news. 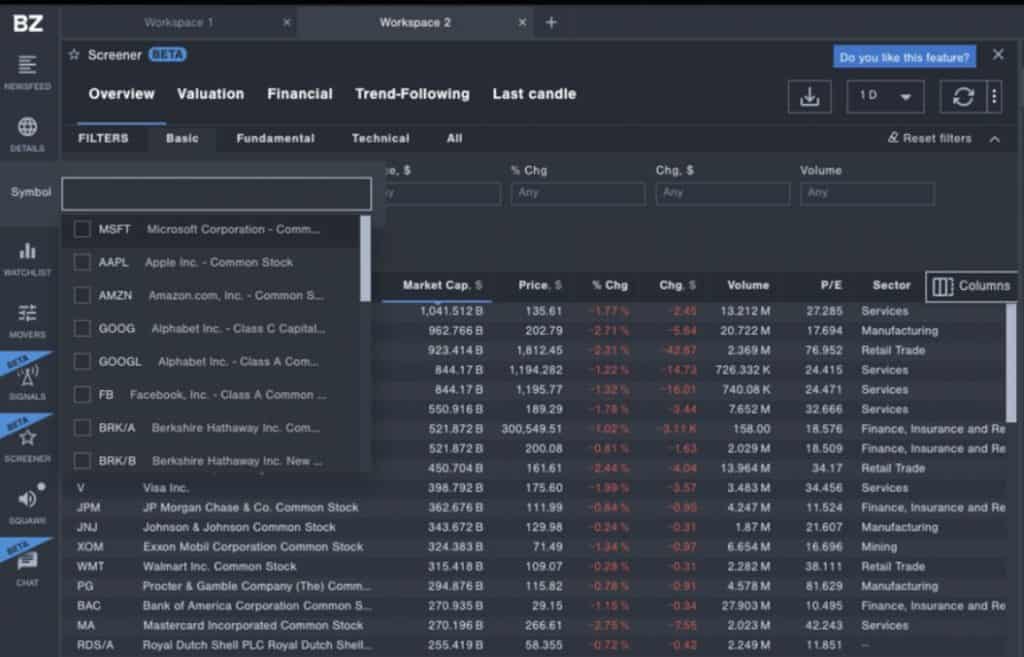 The two services are very comparable when it comes to the quality of the news they’re delivering. Both platforms draw headlines from the major financial outlets (Bloomberg and Reuters) as well as from financial journalism and blogs. They also each have in-house journalists who rewrite headlines and summary text so that it’s easily readable at a glance.

Although TradeTheNews was the first news service to introduce audio squawk, this feature is now common among news trading platforms. In fact, there’s very little difference between the audio squawk features that Benzinga Pro and TradeTheNews offer.

Both Benzinga Pro and TradeTheNews give you a handful of tools and filters to screen news stories so that you’re only getting information about the stocks you want to trade.

Benzinga Pro enables you to filter based on news sources and market sectors, as well as based on custom watchlists of stocks you create. In addition, the platform offers news categories like analyst ratings, M&A, and earnings. One especially helpful feature is that you can add an audio alert to any filter, so you’ll always know right away if a key type of news is breaking. 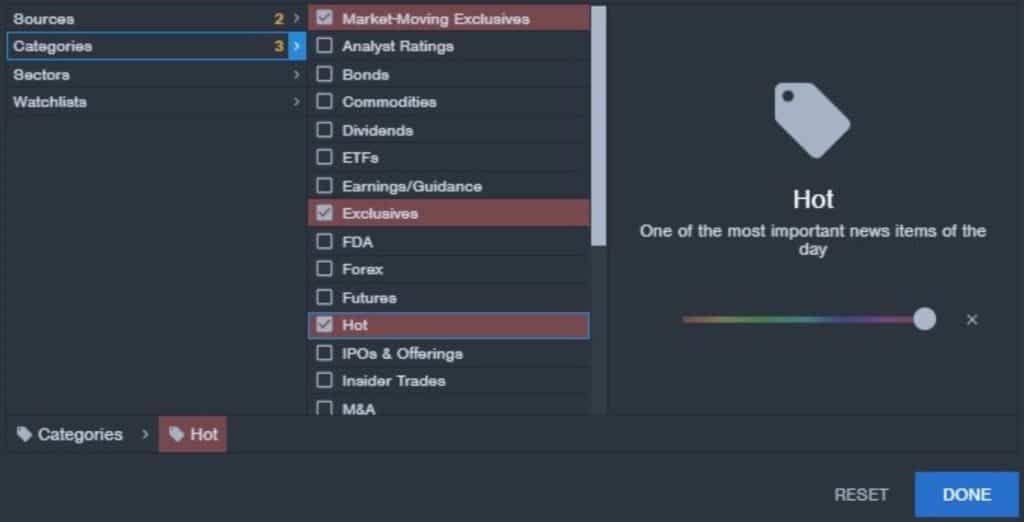 TradeTheNews doesn’t offer quite as fine a level of filtering. You can filter news based on market sector and global region (Americas, Europe, or Asia), but that’s about it. If you want a more constrained news feed so that you’re not inundated with headlines, you’ll need to create a custom portfolio for filtering. 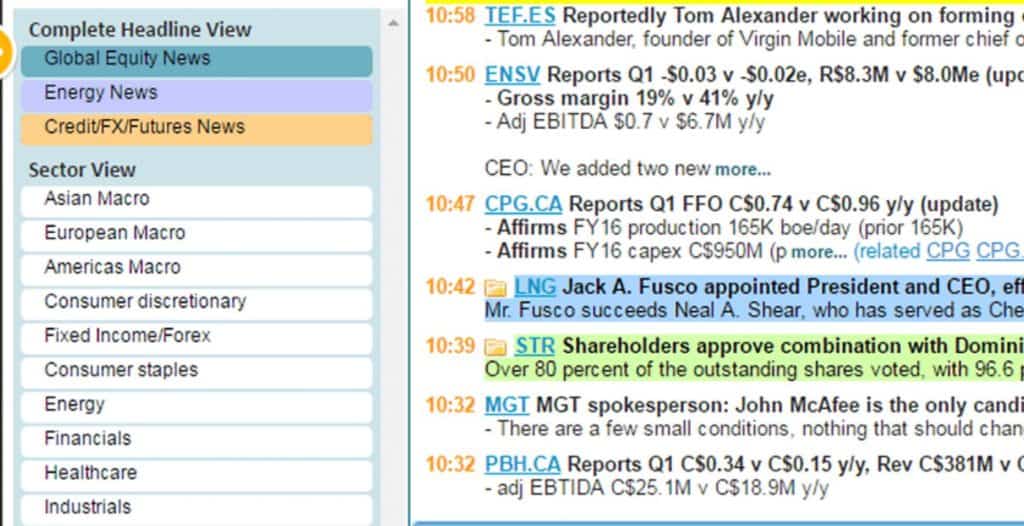 While the main purpose of Benzinga Pro and TradeTheNews is to deliver the news, both platforms include several features to help you analyze it as well.

TradeTheNews stands out in this respect for its “Ask the Newsdesk” feature. If you see a large price movement without a news catalyst or don’t understand why a stock moved the way it did in response to a piece of news, you can type a message to the TradeTheNews newsdesk. The financial analysts there will get back to you quickly with an explanation of what’s going on in the market.

Another helpful thing that TradeTheNews offers is its morning report. This lays out news and price highlights from the previous trading day, economic and earnings news expected for the current day, and anticipated analyst updates. Combining the morning report with a custom portfolio for news filtering is a powerful way to monitor the day’s likely headlines before they even develop.

Benzinga Pro offers company view pages, which let you see all of the relevant news, fundamental data, and price charts for a given stock in a single window. 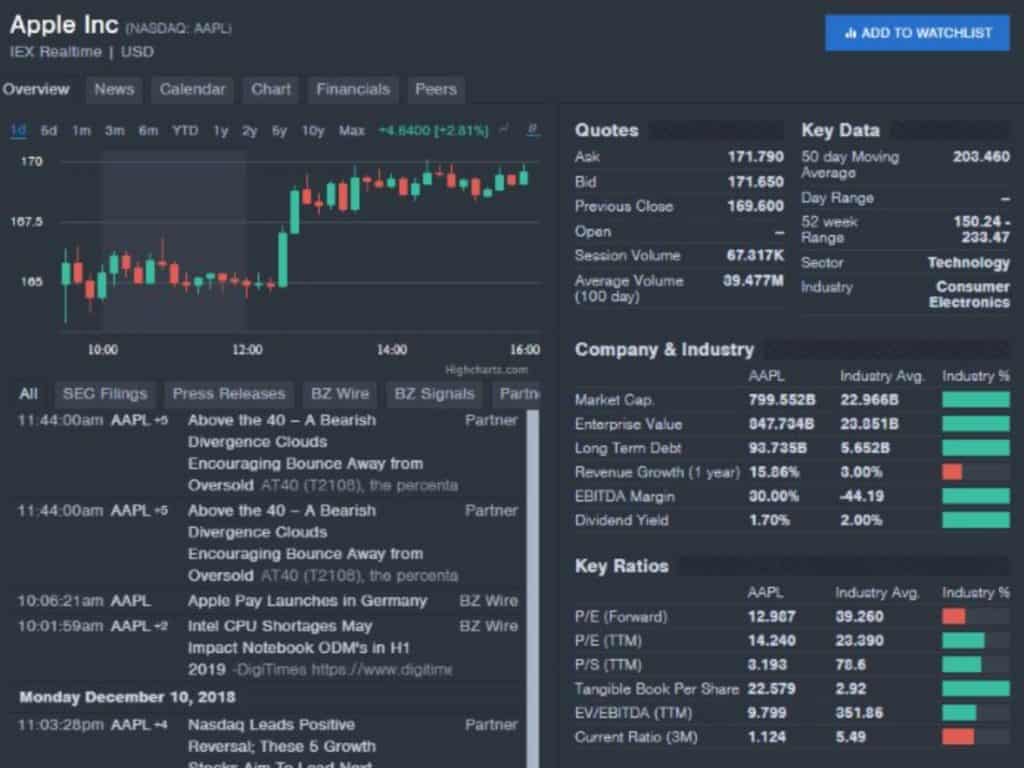 Another neat feature is the sentiment indicator. The analyst who pushes a headline can grade the news as bullish or bearish and it will be color-coded green or red in your feed so it’s easy to see the expected response. The platform also calculates how much a stock’s price has changed since a piece of news came out, which makes it easy to see how a stock responded to a headline after the fact.

Benzinga Pro Basic costs $99 per month and gives you access to most of the platform’s features, including the news feed. However, this does leave out a few features, the most notable of which is the audio squawk. For that, you’ll need an Essentials subscription for $177 per month. 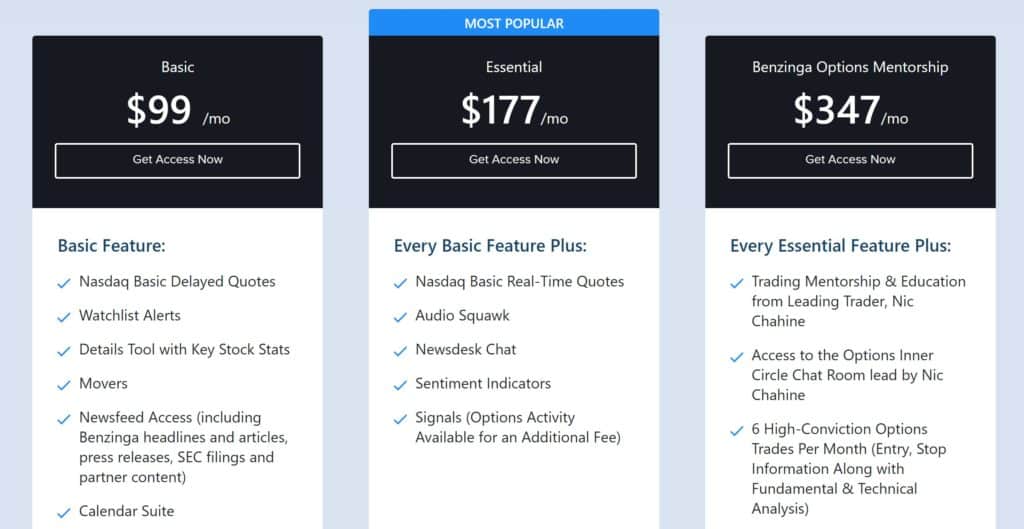 TradeTheNews has five different subscription plans that give you access to add-ons like 13F and forex data. The Standard Equity Text-based Membership plan is comparable to Benzinga Pro’s Basic plan, but is significantly more expensive at $150 per month. The Pro Equity Membership plan is comparable to Benzinga Pro’s Essentials plan in that it includes the audio squawk feature as well as the “Ask the Newsdesk” feature. It costs $350 per month.

Which Service is Better?

Benzinga Pro and TradeTheNews both have a lot to offer for news-based trading. Given how similar the two platforms are, the more than $50 per month price difference between a Benzinga Pro Basic and a TradeTheNews Standard subscription is very significant. TradeTheNews is slightly faster in its delivery and offers daily pre-market reports, but those benefits alone won’t justify the extra cost for most traders. So, for most news traders, we think Benzinga Pro represents a better value.

Alternatives to Benzinga Pro and TradeTheNews

Bloomberg Terminal is extremely expensive and requires a dedicated hardware terminal. Platforms like Newsquawk are pricier than Benzinga Pro and TradeTheNews without offering much in the way of additional features. Refinitiv could be worth a look if you want real-time news inside your trading platform, but most traders would be better served by using two separate best-of-breed platforms.

Benzinga Pro and TradeTheNews are two of the top real-time financial news services for day trading. While both services have a lot to offer, we think Benzinga Pro is the best choice for most traders because of its more affordable price point and wide range of news filters. 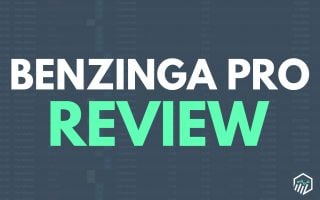 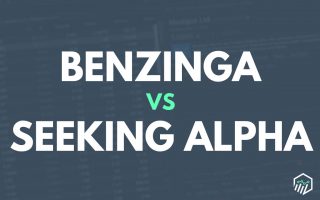 Benzinga vs. Seeking Alpha – Which Platform Is Better? 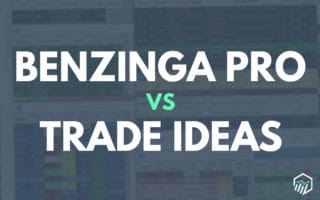 Benzinga Pro vs. Trade Ideas – Which Platform Is Better? 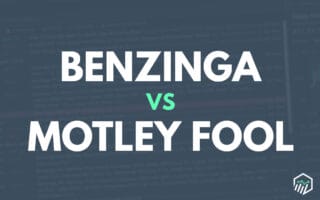 Benzinga vs. The Motley Fool 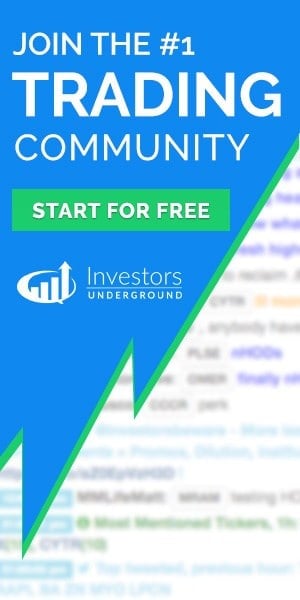