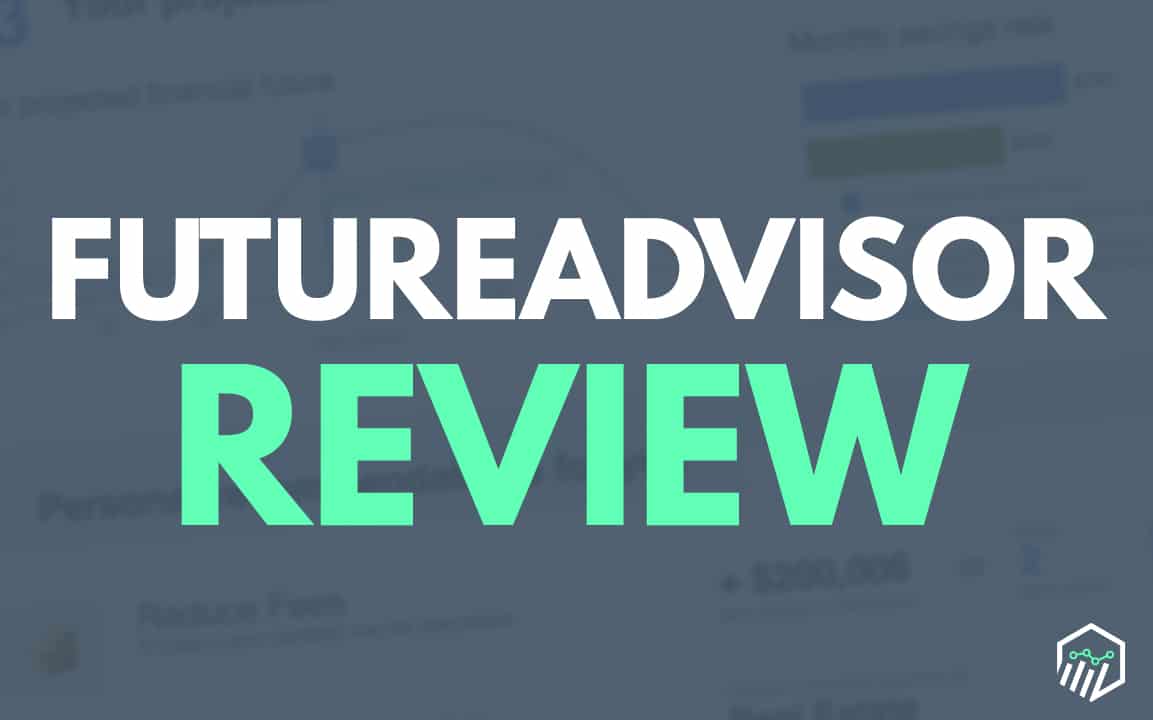 FutureAdvisor is an automated investing platform offered by financial giant Blackrock, with more than $1 billion in assets under management. The main advantage to FutureAdvisor over competing robo-advisor services is that you get access not only to a managed portfolio, but also to fiduciaries at Blackrock who can advise you on your investments and savings. However, keep in mind that this service comes at a somewhat higher cost compared to fully automated investment services like Betterment and Wealthfront.

FutureAdvisor is one of many automated investing platforms that uses Modern Portfolio Theory to build a diversified long-term investment portfolio for you. Your money is invested in a variety of asset classes, including US and international stocks, government treasuries and corporate bonds, and even real estate. Like most automated investment services, FutureAdvisor invests in these assets entirely through ETFs.

The main difference between FutureAdvisor and competitors like Betterment and Wealthfront is that FutureAdvisor directly manages your funds within a third-party account under your name. That means that instead of transferring money to FutureAdvisor, you’ll deposit money in investment accounts with either Fidelity or TD Ameritrade and FutureAdvisor will be able to invest money in those accounts on your behalf.

If you have numerous existing investment accounts (e.g. multiple 401k accounts from past employers), FutureAdvisor will do the work of consolidating these accounts into one or more Fidelity or TD Ameritrade accounts. FutureAdvisor can set up personal and joint investing accounts, traditional and Roth IRA accounts, and even 529 college savings plans – something that most robo-advisors haven’t expanded into offering yet.

FutureAdvisor uses your existing Fidelity or TD Ameritrade investment accounts, or else rolls over your investments into new Fidelity or TD Ameritrade accounts upon signing up for the platform. If you do not have any current investing accounts, FutureAdvisor will open a new account and allow you to transfer cash from your bank account. There are no account opening or maintenance fees for these accounts. Keep in mind that FutureAdvisor cannot roll over 401k or similar retirement plans provided by your current employer.

FutureAdvisor requires that all investors be US citizens or residents and have at least $5,000 in investible assets. In addition, FutureAdvisor will not invest money for an opened account if there is less than $500 in that account.

FutureAdvisor charges a 0.5% annual fee for all of the funds in your managed Fidelity or TD Ameritrade investment accounts. This is somewhat higher than the 0.25% fees charged at Betterment and Wealthfront for essentially the same service.

In addition, beware that there are additional fees associated with using FutureAdvisor. While Fidelity and TD Ameritrade accounts do not have opening or maintenance fees, you can expect commission charges as FutureAdvisor sells off your current investments. In addition, if you consolidated accounts from other brokerages, those brokerages may charge account closing fees.

Furthermore, the ETFs that FutureAdvisor uses come with fees of their own. FutureAdvisor generally invests in iShares and Schwab ETFs in addition to low-cost Vanguard ETFs, so you can expect exchange rates upwards of 0.04% – significantly higher than the ETFs used by most other automated investing platforms. There are also commissions associated with rebalancing your investments as your portfolio drifts.

The FutureAdvisor platform itself is relatively minimal and is only available as a browser-based site. After account setup, which involves linking your existing investment accounts for consolidation, the FutureAdvisor interface is primarily used for projections of your invested wealth and for information about recent trading action in your account. You do have some say over how risk is managed in your account, and you can also use your FutureAdvisor interface to modify these settings over time. 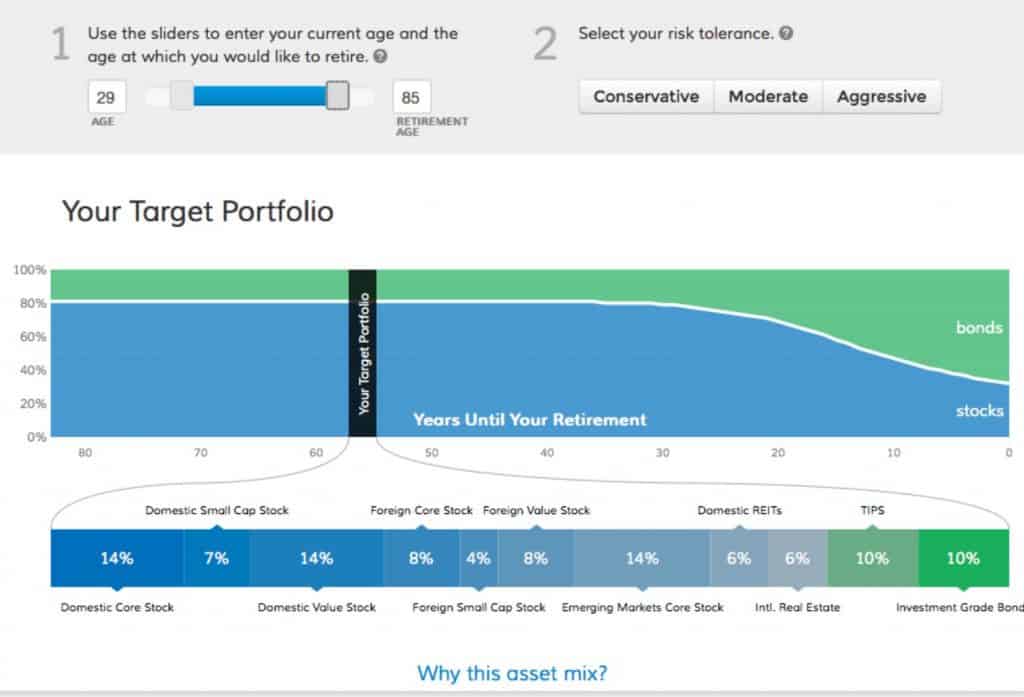 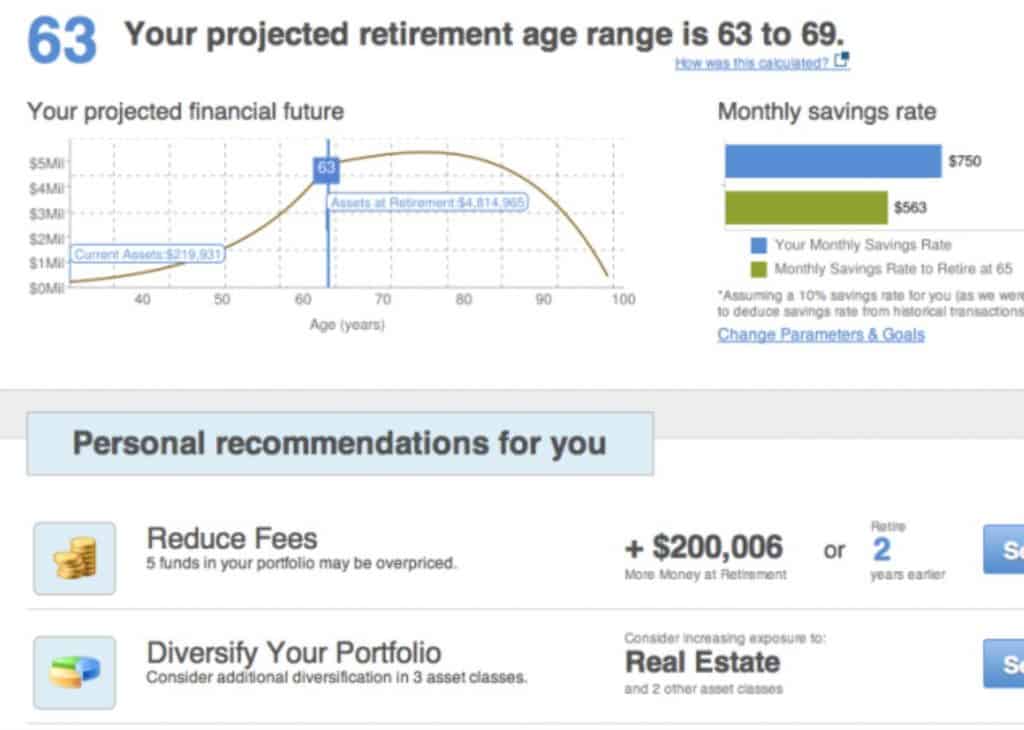 Otherwise, since FutureAdvisor largely serves as a manager for your Fidelity or TD Ameritrade accounts, you’ll need to go directly to your accounts at those brokerages for most information. Keep in mind that while you can see transactions and fees on your brokerage accounts, it’s important not to conduct any buying or selling activity – FutureAdvisor will override you, and you’ll be charged commissions along the way. 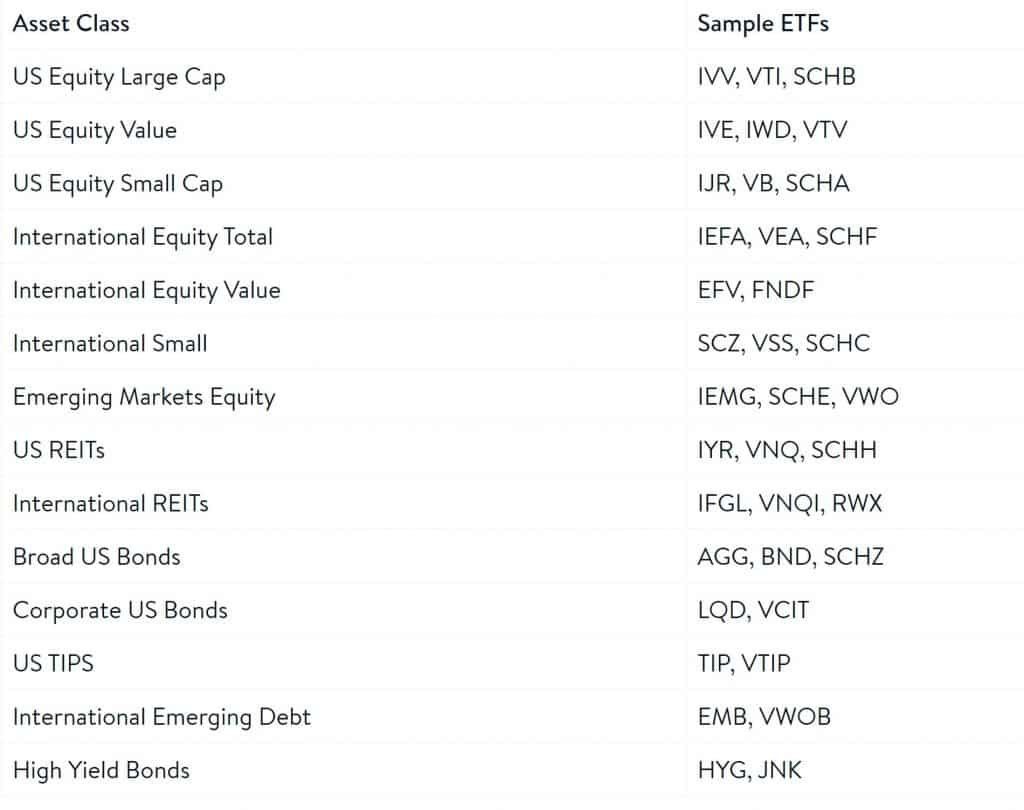 FutureAdvisor is highly similar to Betterment or Wealthfront, but it comes at a significantly higher cost and without several important features such as access to human advisors and goal planning. The main advantage to FutureAdvisor is that it can allow you to consolidate your accounts, but this can also be detrimental since it takes away your control and divests from all of your current holdings upon consolidation. Given that there is no indication that FutureAdvisor outperforms Betterment or Wealthfront, most investors will be better off using one of these lower-priced competitors.

The main difference between FutureAdvisor and other robo-investing services is that FutureAdvisor is designed to consolidate your investments and manage them in a third-party account under your name. This is good because you have access to your account through Fidelity or TD Ameritrade – both popular, feature-rich brokerages. On the other hand, consolidation can be problematic because of the costs it incurs and because you are forced to divest from your current holdings.

A minor, but potentially important feature unique to FutureAdvisor is the ability to support 529 college savings plan accounts. These accounts are currently not supported by any other major robo-advisor.

FutureAdvisor is owned by Blackrock, a financial behemoth with decades of experience managing the money of everyday investors. You can also rest assured knowing that FutureAdvisor is a fiduciary, meaning that the platform is legally required to act in your best financial interest.

Who Is FutureAdvisor Best For?

FutureAdvisor is generally best if you already have accounts at Fidelity or TD Ameritrade. In that case, the fees associated with account consolidation are less severe and you don’t have to go through the hassle of learning a new brokerage interface. FutureAdvisor can also be the automated investing platform of choice if you need to open or rollover a 529 college savings plan.

Otherwise, there is little advantage to FutureAdvisor over competitors Betterment, M1 Finance, and Wealthfront. FutureAdvisor is more costly, requires eliminating your existing investment accounts, and doesn’t offer goal planning features, a mobile app, or the ability to talk to a human financial advisor.

MoneyLion Review – Does This All-In-One Platform Actually Have It All?

Swell Investing Review – Is “Impact Investing” Worth it?

Emperor Investments Review – A Closer Look At This Robo-Investment Service